The Marketplace Fairness Act, and specifically the opposition to the Marketplace Fairness Act has been very much misunderstood and misrepresented. This has happened in my opinion for several reasons. Not the least of these reasons are that the primary two groups claiming to represent Small Business are actually special interest groups funded by Wal-Mart, Target and Amazon.

Important Note: We are 100% Opposed to this legislation as a consumer and as a business. This article is only designed to discuss what would make bad legislation easier to swallow.

The next thing to understand is that we are not against state revenue or taxes. We believe the bill, in the current form, goes about the issue in the wrong way. The current bill casts a very wide net and like dolphins in the net of a fisherman, many Small Businesses are being caught up in the net of this massive federal regulation.

An alternate to the current law would be to more clearly define ‘Nexus of influence’ which at present is the determining factor for who collects sales tax where. Wal-Mart for example ALREADY collects sales tax in all 50 states. They are in favor of this law because it will require many small business owners to do the same. Wal-Mart and the other massive, publicly traded corporations know that Small Business has an advantage in this respect. They also know that small business cannot afford the compliance costs and this law will decrease their competition. Like Wal-Mart, Amazon and other massive publicly traded corporations have a nexus of influence in many more states in which they are collecting taxes. They have affiliates in most states, massive advertising programs specifically targeting states in which they do not collect taxes and, by virtue of the fact that they are publicly traded, they have ownership living across the country. That ownership could be used as part of a case as to Nexus of influence. Congress, who appears to have been authorized by the Supreme Court, needs to create a more clearly defined test for a ‘nexus of influence.’ We believe this test should consist of multiple factors including revenue, physical presence, advertising presence, and company type. We believe a publicly traded corporation should be treated differently than a privately held one, as almost by definition, publicly traded companies are national if not global in scope. Revenue based numbers should be closely tied to current SBA.gov numbers as opposed to arbitrary numbers that would require future legislation to change.

The next issue is that the legislation, in its current format, would require small businesses like ours to collect taxes in 9600 different jurisdictions. I did some calculations, based on our current form with the state of Colorado, we would need a piece of paper about as wide as 3.5 football fields to have enough columns for all the jurisdictions reports. We believe it would be ‘more fair’ to limit the rates to State only rates. That would reduce the number of reports from 9,600 to 50.

We believe all rates should be posted on a federal website and available in CSV format. We believe that the same website should provide a way to upload CSV format of your sales and have it automatically complete the return for all states. We believe the federal website should provide a single point of registration and that no business should be forced to file 0 dollar returns for every city and county in which it did not have any sales.

Turning our attention back to the current legislation. We do not want rehash everything discussed in our first article on the Marketplace Fairness Act, but some issues are worth discussing again. 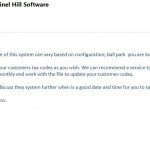 While Senator Enzi maintains that the bill is ‘neither complicated nor costly’ the facts say otherwise. It is true that under the law, the states would have to provide ‘free’ software to small business owners. This software, while helpful, does not deal with replacing the custom carts and inexpensive accounting software most of us use. We have received quotes for the accounting systems alone, starting at $16,000! While some standardized carts have free software available with the purchase of a subscription, most of us use carts that are either custom or customized. Reprogramming these carts to work with the states ‘free’ software will cost tens of thousands of dollars. Its also important to note that the subscription service required, which may be free for the first year, can cost up to $15 per report per month per state with an additional fee for each additional jurisdiction AND each transaction. These fees, although small individually, total to thousands if not tens of thousands of dollars.

The basic principle of this bill is that the states where the product is being used should receive the tax revenue AND that not having online retailers collect that revenue is ‘not fair.’ That logic fails when you look at it fully. Many customers go across city, county and even state lines to make purchases from brick and mortar retail stores. If we are going to use this same logic, retailers, instead of collecting a single rate, would need to collect taxes based on where the consumer lives. Most retailers would tell you that such a law would be ridiculous and cumbersome at best. The same is true for online retailers — at least for those of us who are small, private companies.

While Special Interest groups, claiming to represent efairness, Main Street and Small Business claim this bill is pro Small Business, the truth is this legislation is a wolf in sheep’s clothing. These groups are actually funded by large special interests looking to minimize competition from small business like ours. Federal Regulation, never mind Federal Regulation supported by major publicly traded mega retailers is NEVER in the interest of small business. If you believe it is, I have a bridge to sell you and I will sell it tax free 🙂

This article us the opinion of Justin Krauss. Brands, Trade Names and Stores mentioned are not affiliated with Garage Flooring LLC and are or maybe trademarks of their respective firm. 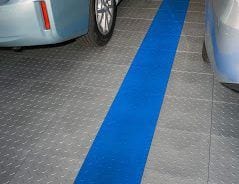